Kortney had an unparalleled zest for life. She loved playing with friends and animals (stuffed or real) and enjoyed school at Wolf Hill Elementary in Oceanport, NJ, where she was in third grade. Kortney enjoyed basketball and played soccer, but her greatest thrills were at amusement parks and water slides. Kortney was a daredevil with little fear and a spitfire who knew how to get her way. She brightened up any room with her smile and laughter.

Kortney was the picture of health at her ninth birthday party on November 27, 2005. But in early December, she complained several times that her head hurt. These headaches seemed to go away within about ten minutes and she resumed her play. One day when Kortney was out in the snow, she looked up at me and I noticed that her left eye was crossed, turned inward. We had an appointment with an optometrist that day who said that sometimes the “sixth nerve palsy” can be caused by a virus and the eye may go back to normal on its own. To be sure, she ordered an MRI.

On Tuesday, December 13, Kortney had the MRI and our worst nightmare was realized when we got the devastating results and diagnosis. Kortney had a very serious inoperable brain tumor in her brainstem.
We were referred to one of the top pediatric neuro-oncologists in the country, Dr. Jeffrey Allen in New York City. He gently gave us the reality: there is nothing they can do for these tumors because they are inoperable. Radiation can buy her some time. He gave her two years to live with a less than 5% survival rate. Dr. Allen explained to Kortney that the radiation treatment would be like “bright lights that don’t hurt.” She did her usual, “Pfff, I’m not afraid of bright lights.”

Kortney’s biggest issue was that the kids at school would treat her like the “kid from the accident” again. Unbelievably Kortney was in a life-threatening car accident in July 2002. She had a skull fracture and traumatic brain injury. We almost lost her then. She was unconscious for several days and in ICU for eight days. For many months she received speech, physical, and occupational therapy and, amazingly, did it all while attending full day kindergarten.

The doctors said that the brain tumor was not a result of the accident. They said, “Kortney was just struck by lightning twice.” We knew if anyone could fight the battle ahead it was Kortney. As someone once said, she was “a tough cookie” and when things got challenging during treatment she would say “I’m a tough cookie!” 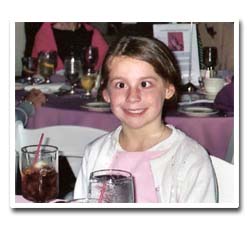 Luckily Dr. Allen referred us to one of the most caring and best doctors in the world, Dr. Jean Belasco at the Children’s Hospital of Philadelphia (CHOP). Kortney qualified for a trial which used a trial drug named Iressa in conjunction with radiation therapy. The benefit of this drug was the lack of serious side effects. Since no drugs work on a brain stem glioma we chose a drug that would give her the best quality of life possible. On January 5, 2006, Kortney started radiation therapy and Iressa. Aside from occasional nausea and a rash caused by the Iressa, she didn’t have many other side effects from the therapy. The first two weeks we stayed at the Ronald McDonald House in Philadelphia. We went to the Philadelphia Zoo and the Franklin Institute, but without her friends, it was pretty boring for a constant player like Kortney and so we began driving back and forth daily for treatment. We got up at 5:00 AM for a 7:00 AM treatment. Radiation only took 20 minutes and then it was back into the car. Kortney napped on the way home and arrived at school by 11:30 AM, in time for lunch and recess. She was amazing!

The second week of February she finished radiation and kept taking Iressa. The weekend after she finished therapy we went to the Great Wolf Lodge in the Poconos. In mid-March we returned to CHOP for a follow up MRI and got the good news that the tumor had shrunk, all signs were positive. We knew the tumor would regrow unless there was a miracle. Regrowth usually occurs within 6-9 months so I felt driven to do everything with Kortney within six months. We planned a trip to the Atlantis in the Bahamas in April, a Disney Cruise in May through Make a Wish Foundation, and we joined a beach club for the summer. I lived every day just waiting for the “bomb” in Kortney’s head to go off. We were utterly shocked at how fast it did.

Kortney was the only one all packed for our Atlantis trip when, in the evening of April 5, she complained about a bad headache. She had been complaining for days about bad pains in her shins and arms. The next morning at 6:30 AM she got up and screamed in agony that her head hurt so badly. She couldn’t walk without my help and became unresponsive. An ambulance took her to Monmouth Medical Center and she was then air-lifted by helicopter to CHOP. After four days she was stable enough for a MRI, which confirmed everyone’s worst fears. The tumor had spread.

Not only did Kortney have one of the rarest types of brain tumors, it also behaved in one of the rarest ways. It basically blew up everywhere in her brain and down her spinal column. She was in a lot of pain and having seizures so we decided to medicate her to make her more comfortable. Rich slept on the floor in a sleeping bag and I slept on the couch. We remained at Kortney’s bedside for 21 days until she stretched her angel wings and flew away at 9:10 PM on April 27, 2006.